Twenty MBA in International Management students in their second semester at Business School Pforzheim had the opportunity to explore six companies in the Black Forest and near Lake Constance in Southern Germany during a four-day excursion. As the area is home to many SME’s and hidden champions, the MBA students from seven different countries got in contact with distinguished companies from diverse industries.

On the way towards Lake Constance, the group visited Bizerba SE & Co. KG in Balingen, capital of the district of Zollernalbkreis and located near the Swabian Jura. Bizerba was founded in 1866 and is a German provider of weighing and slicing technologies for industry and trade. It is a worldwide leading specialist in industrial weighing and labeling technologies. With its over 100 divisions, Bizerba employs more than 3,900 employees worldwide. Whilst the visit, Mr. Robert Keller, Vice President Global Service, introduced the company and its future strategy to the MBA students, before the students were taken on a guided plant tour through the headquarters.

Second stop on the first excursion day was at Schweizer Electronic AG in Schramberg, situated in the eastern Black Forest, close to Rottweil. Founded in 1849, the family-owned company has about 800 employees and produces PCB’s, mainly for the automotive sector. With its cooperation partner Meiko, it belongs to the top 20 PCB-producers worldwide. Mr. Dirk Gennermann, Head of Marketing, took the students into the world of Schweizer Electornic AG and Mr. Wolfgang Bauer from Technology Knowledge Management gave a guided tour through the production facilities.

On the second day, the MBA students were invited to Winterhalter Gastronom GmbH, the specialist in commercial warewashing systems. The company was founded in 1947 by Karl Winterhalter in Friedrichshafen. Today, Jürgen and Ralph Winterhalter, the son and grandson of the founder, run the family company. The MBA students had the pleasure of meeting Mr. Ralph Winterhalter himself, who welcomed the group and gave a plant tour. Afterwards, Mr. Fabian Löffler, Regional Product Manager, introduced the company and Mr. Jens Steck, Head International Product Management, demonstrated two new and innovative products. With over 1300 employees worldwide, the owner-operated company is one of the global players in the commercial kitchen industry.

In the afternoon, ifm electronic GmbH welcomed the group, a stone’s throw away from Winterhalter.  Founded in 1969, the company with more than 6,000 employees in over 70 countries worldwide operates as a service-oriented sensor specialist. Mr. Frank Watzlawik from Human Resource Development welcomed the MBA students and introduced ifm as a company. His colleague Mr. Steffen Fischer, Managing Director Human Resources, explained future trends and engaged in discussion with the group. Before heading back to Friedrichshafen, the MBA students received a plant tour through the production facilities and discovered first-hand how sensors were manufactured.

The next morning, the MBA students visited Zeppelin Systems GmbH in Friedrichshafen. With over 1,300 employees, of whom many are highly qualified process technicians and engineers, they constantly make improvements and develop innovative processes and new technologies in plant engineering. Mr. Axel Kiefer, CEO & Chairman of the Management Board, held a presentation on the company and afterwards joined the MBA students for a plant tour.  The foundation-based structure, inherited from the Graf Zeppelin Stiftung (foundation) set up in 1908, gives economic strength to Zeppelin Systems and is the basis for long-term and successful partnerships with customers.

On the last day, the MBA students enjoyed ERWIN HYMER GROUP in Bad Waldsee in Upper Swabia. The company, which employs around 5,500 people, unifies Europe's leading caravan and motor home manufacturers under one roof. Mr. Klaus Rudolph, CFO of ERWIN HYMER GROUP, and Mr. Stephan von Terzi, Head of Marketing & Communications, welcomed the MBA students and engaged in discussion after having presented the company. The plant tour which followed, offered an insight into the assembly lines of caravans and motorhomes. Before heading back to Pforzheim, the MBA students had the opportunity to dive into the past and future of mobile travelling during a guided tour through the Erwin Hymer Museum.

During the afternoons, the sunny weather and beautiful scenery of Lake Constance invited to linger near the lake. On Wednesday, Mr. Henrik M. Lingenhölin, Director of the Hofkammer des Hauses Württemberg and Alumnus of Pforzheim University, arranged a wine tasting session at Friedrichshafen Castle and a joint dinner at a Yacht Club nearby. Whilst on Thursday, some MBA students took up the challenge and did a hike to Pfänder, a mountain in Austria close to Bregenz, with a unique panorama view over Lake Constance and 240 Alpine peaks of Austria, Germany and Switzerland.

The program mix between business and cultural related topics lead to an all-round successful excursion, new insights into the German working environment, many good memories and hopefully future opportunities within these businesses. Many thanks especially to the companies for offering this unique opportunity to international MBA students of Business School Pforzheim - exploring hidden champions within the region! 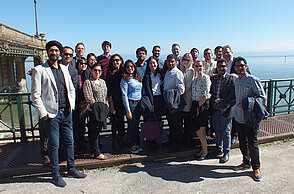